Things aren't always what they seem in the REVENGE HOUSE

Have you been watching the new,
hot show on ABC....REVENGE?

If you have you'll be interested
to know the Grayson mansion was
actually based on a real house (or houses),
but most of it was Photoshopped
and the house in the show doesn't really exist 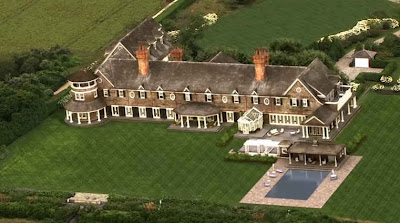 Apparently, they based it on a house designed by
architect PETER COOK (Christie Brinkley's ex) and
made it bigger for TV. They added things like the
solarium on the back.

Another actual house they based it on is
this one 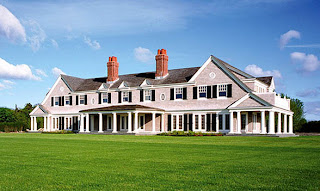 in Amagansett in the Hamptons
They stretched it,
moved the pool and added some extras
As for the inside, the pilot was filmed inside
a real house in North Carolina, in Landfall,
a community on the Intracoastal Waterway
in Wilmington
To see more of this REAL home
click HERE
This is the real foyer 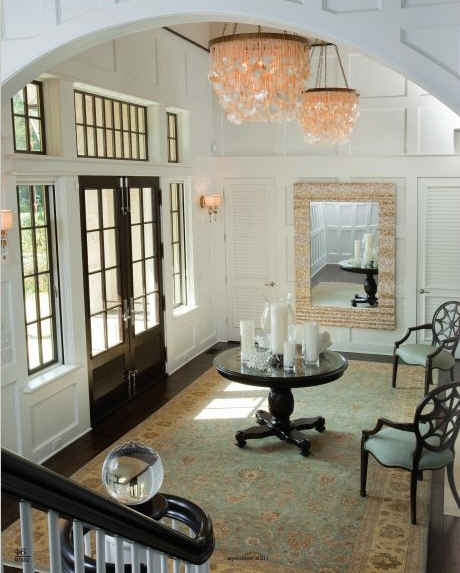 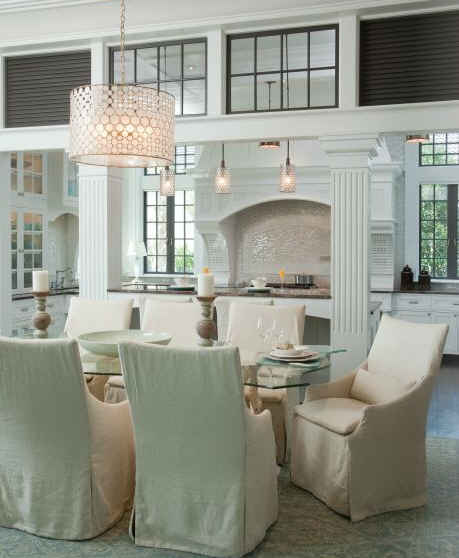 and the family room 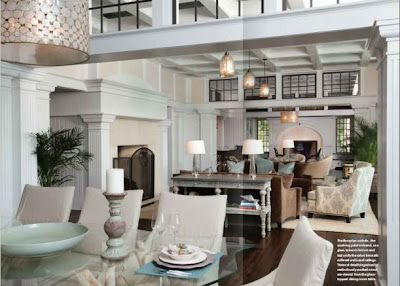 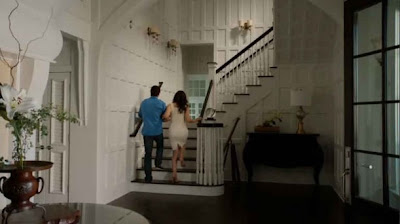 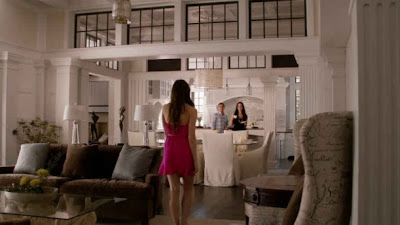 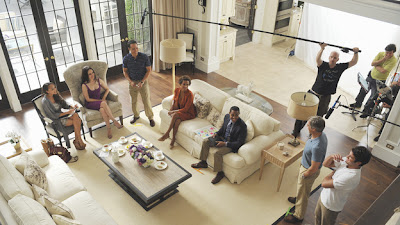 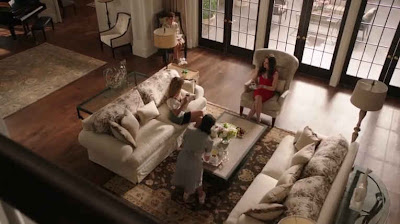 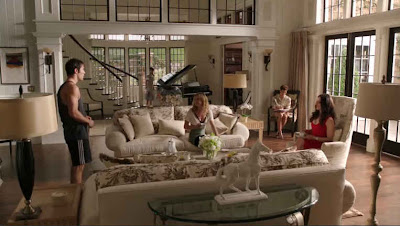 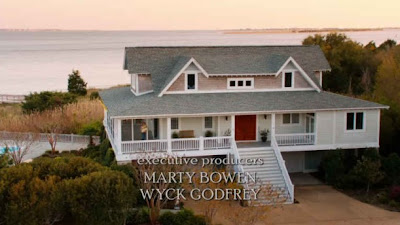 and here's the recreated one 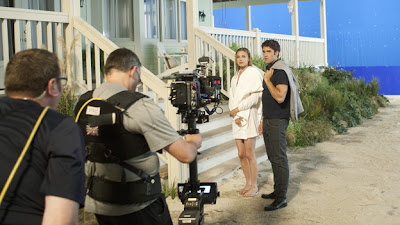 If you notice there's fewer front steps
and there isn't any landscaping to the right
of the steps in the original home, since it is the
driveway to the garage underneath the home 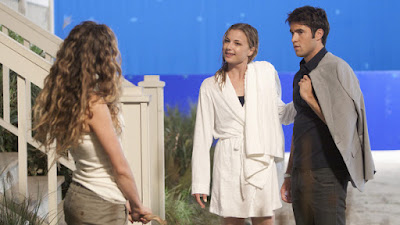 Here you can notice the fake ocean backdrop 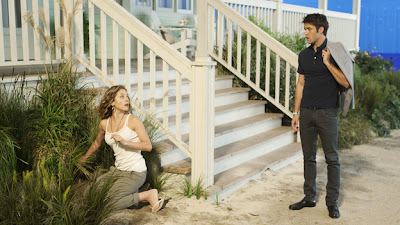 here's a shot of the "sun" light 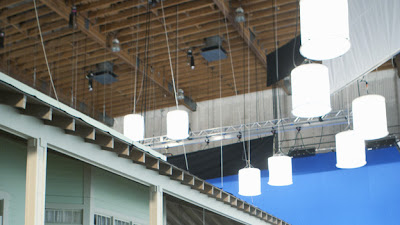 Here's the inside shot for
the pilot in Emily's home 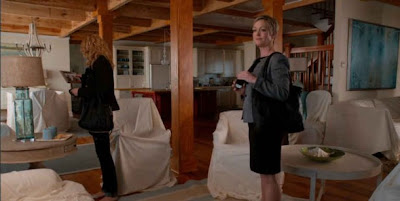 Here's the inside recreated... 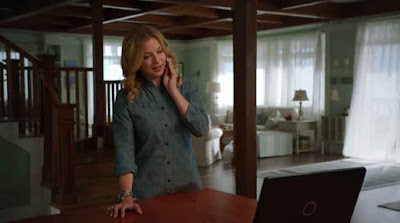 If you notice the ceiling beams are different


and the walls now are painted a soft green
My favorite, though, is "the chair"
It has become the much talked about
piece of furniture in that sprawling home
"Queen" Victoria Grayson's throne 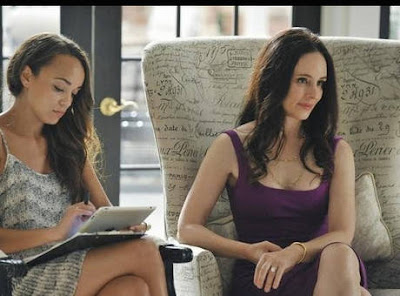 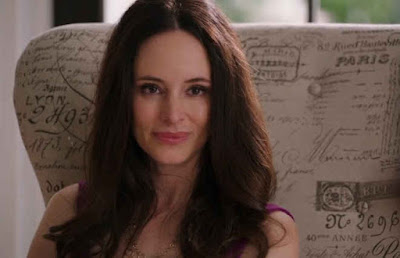 Here it is at Home Goods
for such a bargain 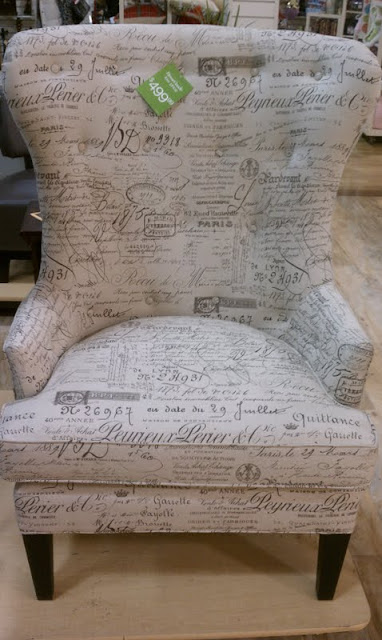 The exact chair!!
I could hardly believe it,
right before my very eyes
and only $500.00 to feel like
a TV villainess
You can see through the magic of television how
you can combine all the necessary components
to make just the right environment...
even if it isn't real, right down to the chair ;)
Fantasy homes or not,
REVENGE is worth watching.
It has become much anticipated
Wednesday night viewing in my home
I hope it will be for you too! 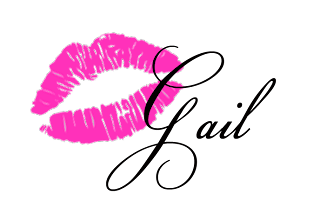 Marie Söderberg said…
Thank you for this post, I love to look behind the scenes, what à beautiful Home they do can creat With photoshop..Im surpriced..bit I love the Style..Thanks for you visit at My FB page..viär to see you orten..have a lovely day. Kiss and hugs
January 5, 2012 at 4:16 AM

Unknown said…
Gorgeous house. But the kitchen? Really??? Somehow I can't imagine making tuna casserole in there. No wonder rich people are so skinny.
January 10, 2012 at 9:00 AM

Anonymous said…
Hey, I'm from Brazil and I love Revenge, the story is amazing and the home décor is fantastic, the beach style in Emily's house is so cozy. This post is incredible. Congratulations.
July 12, 2012 at 9:29 AM

Unknown said…
Buy and sell new and used modern, outdoor, office, bedroom and home furniture.
Choose from a great selection of gently used furniture for every room in your home.
More here www.postallads4free.com
July 31, 2014 at 3:17 AM

NCackalackee said…
That chair is just DELICIOUS! And the arrangement of that room was the inspiration and Ah-HA moment for me in determining how to arrange my own living room that has some spatial challenges. Smaller scale obviously, but I WILL have a beautiful "statement" chair similar to Victoria's...
December 16, 2015 at 11:15 AM